Last night, I shifted into Huntz Hall from the old Bowery Boys movies and watched TV with Big Dope. We were watching some documentary films of the Nazi rallies in Nuremberg back in the 1930s. Big Dope says to me, “I think that mob mentality leads to many of the atrocities in history. What do you think?”

Well, he asked didn’t he? I stared at the scene of thousands upon thousands of people standing and watching Hitler speak, I said, “I think that there must be at least one person in that crowd who needs to go to the bathroom real bad.”

He called me an idiot. Me, a visitor to this strange planet. 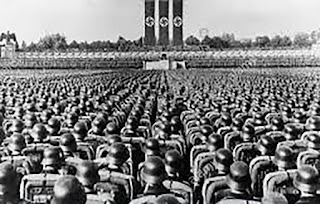