Just as I left the back door of my condominium building, I looked up saw a grown man skipping down Ferry Street. Yes, skipping—in broad daylight. I immediately turned and fumbled with my key, trying to get back inside the building.

“Exercising. What are you doing?”

“By skipping?” I ignored him as best I could but noticed that several of the children at the church school across the street were watching. Their little faces were pressed against the wrought iron fence like prisoners watching a “free world” drama, every mouth open.

“Not since I was five years old.”

“You humans certainly tend to forgo the joys of life as you get older,” he said. He had assumed a familiar shape. I couldn’t quite place it but it was someone from my past. “Taking the air, are you? Come on, I’ll go with you.”

“You can come along if you behave.”

“Moi?” he said in mock surprise. For reasons unknown to me he had been struggling to learn French. “Je suis le pire?” he said.

We walked around a former school, now serving as an apartment building for artist and writers. It was spring and the tulip trees were blooming. C.W. ran ahead and examined them, sniffing and touching the petals of one to gauge its substance.

“Simply beautiful,” he said. “We have nothing like this where I come from.”

He turned and stared at me with a look of such mournful sadness that my mind flowed to an imagined gallery where I could picture the face of Christ in a painting by one of those Renaissance painters, captured in soft and subtle chiaroscuro. Then I was snapped back to reality.

“Come on then, Trou du cul.” This wasn’t starting out well.

We rounded the corner and walked along the front of the building. I was trying to pick up the pace when C.W. emitted a shriek and a stream of Falloonian that I couldn’t understand.

“Lookee, lokkee, lokkee,” he yelled and ran over to a sculpture standing on the corner of the apartment property. I had passed it dozens of times and hardly noticed it. It was a standing figure created from bits of broken glass and pottery, resembling a pair of giraffes.

I stopped and waited.

He seemed surprised that I wasn’t sharing his excitement. “Does you planet have a lot of neat stuff like this?” 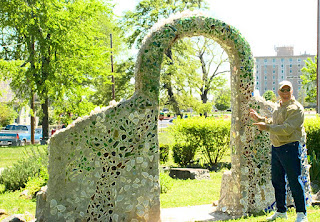 He turned back to the sculpture and caressed the broken pieces forming its surface. He hummed for a minute and then spoke rhythmically in a long, unbroken string of sounds in his native language, almost seeming to create a mystic union with this inanimate piece of work. After a minute or so he stopped, patted the sculpture a last time and walked back to where I stood.

“At what age and by what process do they remove the sense of wonder from the bodies of your species?”

I couldn’t think of anything to say.

We moved on. It was going to be a long walk.
Posted by JimmieG at 11:43 AM No comments:

For a moment I thought my eyes were deceiving me, but no. There on a bench near the post office were my old friends Lefty and Lucky, the conjoined twin, arguing as usual. C.W. usually doesn’t assume multiple shapes but he claims these two only account for one. I guess maybe he’s right.


As I neared them, I could catch the drift of their conversation.

“Why is that unfair, Dickhead?”

“That’s the worst song ever written, everyone knows that. It’s unfair.”

They stopped when they saw me. “What’s shakin’, Slick?” Lefty said.

“We’re playing a game our friend Perry Carr taught us.” Lucky said. “It’s called ‘Name a song that you would rather blow your brains out than ever have to listen to again.”

“Some call it ‘Popular Dialectics,’” Lefty said. “You can also play a version of it called ‘The ‘Swarmiest TV evangelist’ on earth.”

“But you can’t say Joel Olsteen,” Lucky interjected before I could say anything.

“Who could compete with him?” Lefty said.

“I see your point. So is this all you do all day?”

“What do you do all day?’ Lucky said. He sounded offended.

“Oh I write, paint, sculpt, pick the banjo, go for walks, you know.”

“What a douchebag,” Lefty said, Turning to Lucky. “Okay, here’s another: The Invasion of Iraq.”

“No, Crap For Brains. It was selling guns to the Ayatollah Khomeini to fund the illegal war in Nicaragua.”

“Dumbass, that wasn’t bad policy. It was just treason.”

“Let me guess,” I interrupted. “’Name the worst policy decision of the modern era.’”

“Listen to Einstein here,” Lefty said. “Maybe he ain’t so stupid, after all.

“He probably is, but why don’t you ask him for his entry?” Lucky said.

I ignored the question. “C.W.,” I said. “When did you get interested in politics?”

“We’re not,” Lucky said. “We just get amused when your species starts wars without any plans for paying for them.”

“Or when you support assholes in foreign countries so you can maintain fuel for your beloved internal combustion engines,” Lefty chimed in.

“Hey,” Lucky said, “Let’s name the stupidest piece of equipment in the galaxy.”

“I thought you were just supposed to be analyzing us.”

Lefty looked at Lucky who just shrugged. “Why don’t you go for a walk?” he said, looking back at me.


I wandered off, hurt. For some reason, I thought of the Lee Greenwood song “God Bless the USA.” It was pushed out by “Boot-Scootin’ Boogie.” Then, “If I Were a Carpenter.” Oh, lord!
As for Lefty and Lucky, when I rounded the corner I could hear them start back up.

“A man hawking and spitting on the sidewalk,” Lefty said.

“No,” Lucky said. “It’s a woman wearing a short skirt and cowboy boots.”
Posted by JimmieG at 1:33 PM No comments:

We enjoy an early spring in our state as a recompense for brutal summers and mercurial winters. So I was enjoying one and visiting, in my mind, a place far away in a time equally distant. I was aware that someone had taken the seat next to mine on the park bench where I sat. But I paid no attention until I felt a poke in my side and someone said, “You always did daydream a lot.”

I looked, and was startled to see, looking me over as if I were a newly captured criminal, my fifth-grade teacher, Miss Edith Rupe. Well, of course it was C.W., but the resemblance was so uncanny that I allowed myself to be transported back to 1953. It felt strangely comfortable, but then I am a white male.

“Do you remember me?” she said.

“Oh yes, you were everyone’s favorite.”

“Do you remember where I lived?”

“Yes, in a boarding house on Sixth Street.”

“From where I walked the eight blocks or so to work.”

“Do you think a teacher in those days could afford a car?”

“I saved bus fare so I could have a parakeet—my only luxury.”

“Yes, I seem to remember when it died. Petey, or something like that was its name.”

“Did you have a good life?”

“What do you think?” She—it—leaned back on the bench and looked wistfully toward the river. “How good a life do you think an ‘old-maid’ had on a teacher’s pay in the 1950s?”

“Well, you were good at it”

She just looked at me as if I had passed wind or something.

“I mean, several people I know, who you taught …”

“Whom you taught, have done quite well. I know one, a stockbroker now, who made nearly a million dollars a year before he retired.”

“Yes, that made it all worthwhile.”

I looked to see if I could detect irony. Nothing. Just sadness.

“We all did a good job considering,” she said. “Teachers still do, don’t they?”

“Then tell me something.” It was C.W. talking now.

“Why are your leaders trying to take teachers back to the conditions that existed in the old days? Don’t they respect them at all?”

“What about the others?”

“Well, they seem to think things would be better with private schools, or even better with religious ones.”

“After what some of their leaders have been doing to those young boys?”

“Well, in some cases their thinking may be a little behind …” I stopped and flushed a crimson red.

Fortunately for me, Miss Rupe interrupted. “Before you buy into that “private school” thing, can I ask you a question?”

“Sure.” I was glad to change the subject.

“Did I ever teach you about a concept called ‘Cherry-picking’”?