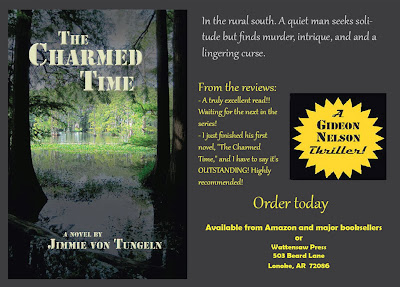 Posted by JimmieG at 6:42 AM No comments:

So I came in yesterday and caught C.W. at my computer again. I’ve given up on keeping him away although he has some method of accessing my password-connected websites. He won’t tell me how he does it but I know he does for I sometimes find weird purchases, like the time he ran up a sizeable bill at Victoria's Secret and charged it to my credit card. We had words over that but did that stop him? No. I’m now paying for a set of DVDs titled “Ten Weeks To Banjo Fun.”


Today was even weirder. He was working on, of all things, a campaign poster. In big letters on an Illustrator worksheet were “No Government. No Time.”


“I’ve decided that you should run for political office,” he said.


“No,” he said. “That new senator from Texas is crazy. You are just unstable.” He thought for a moment. “But don’t worry. I’m your campaign manager. We’ll keep that from the public.”


He did resemble a campaign manager, I suppose. He was paunchy, bald, and had little snaky eyes that darted back and forth like black hummingbirds.


“You will be my campaign manager?”


“You bet. We’ll sell you to the public as the real deal. You’ll be as popular as a whore on a troop ship.”


I had to sit down. “C.W.,” I said slowly, not knowing where to start. “Do you know anything about politics in America?”


“Then you know that a politician has to have a spotless past.”


“Oh please,” he said. “That is so passé. Didn’t you learn anything along the way? We’ll use the ‘Salvation Strategy’ that worked so well for Junior Bush.”


“Yep. We’ll pick a date when you repented of your sinful past and accepted salvation. Then we’ll forbid the press from questioning any aspect of your behavior prior to that day.”


“The Salvation Strategy. I see.”


“Works like a charm. You are reborn as a politician. Now,” he said. “We need to get you fitted for some new clothes.”


“C.W.,” I said. “Politicians have to be knowledgeable about things like the economy and foreign relations.”


“They have to be experienced.”


“They have to be charismatic.”


“Charisma is as charisma does.”


I said, “Now just what the hell does that mean?”


“It means,” he said, with exasperation showing in his voice. “That we can market you like the latest model of a classy car. So don’t worry.”


I don’t know why I made the effort but I did. “A politician has to have a platform on which to base a campaign.”

“Sure enough,” he said. “And we have the most sure-fire platform there is. The one that has propelled more politicians into office over the last few years than any other.”


“Are you completely clueless? Can’t you guess?”


“No,” I said. “Clue me in. What will I tell the public to convince them to elect me to run the government?”


“Simple,” he said. “You just tell them that you hate the government.”
Posted by JimmieG at 5:09 AM No comments:

C.W. and I had our first real argument last week. I think, in retrospect, that he did it just to annoy me. Now, I know he has fans among some of you, but trust me, he is not above “pulling my chain” if it excites some sort of Falloonian “giggle button,” as he calls it. Here’s what happened.


I came in one evening while we were home alone wanting to watch the news on television. There, propped on the couch, was C.W. in one of his favorite shapes, that of Kyle the young yuppie sales rep. He was holding some sort of flavored beer in one hand and a People Magazine in the other. A baseball game blared on the television.


“There’s something important going on in America tonight.”


“I know man, the baseball playoffs. I’ve already got the game on.”


“Uh,” I said. “It’s something more important than the baseball playoffs.”


He looked at me with surprised written on his face. “What could be more important than the baseball playoffs?”


“Oh?” He thought for a moment. “Is the dance contest show on tonight?”


“America is in danger,” I said. “Try to imagine the worst thing that could happen to us.”


“Oh,” he said, pursing his lips. “Of course.” He switched to another channel where a group of bearded men sat around talking. “No to worry,” he said. “Duck Dynasty is still on the air.”


That’s when I’m afraid I began to yell at him.

“Don’t you even glance at the newspaper?” I screamed. “Don’t you have any idea what is going on? There’s a sickness settling on us. Haven’t you heard? Are you totally out of touch with important events in the world?"


He glared back. “Both Kate and the baby are doing fine, thank you.” he said.


“Give me the remote,” I said, adding an expletive.


“No,” he said as he thrust it between his legs. “This is important. I want to be able to tell the folks back home that I was watching when the Cardinals clinched the pennant.”

“And what about America defaulting on its financial obligations?”


“Oh that stuff,” he said. “Blah, blah, blah. Sean Hannity will explain all about it later. It’s boring anyway.”


“Sit down,” he said. “Let me finish this game and then we’ll watch Dr. Phil. That always makes me feel better.”
Posted by JimmieG at 5:25 AM No comments:

One couldn’t help but feel a little sorry for C.W. when he arrived for morning coffee as a decrepit gentleman of advanced age, at least 90-plus. His cheap clothes sagged from his boney frame and he used a cane in walking.


Ignoring him, I placed a cup of coffee on the table and guided him toward it. He lowered himself carefully and pointed toward the cup. “Saucer,” he said.


I walked to a cabinet, retrieved a saucer, and placed it under the cup.


He said, “Thanks.” He took the cup, poured coffee into the saucer, laid the cup aside and began slurping the coffee from the saucer.


He emptied the saucer, refilled it and slurped again. “I want to borrow your car,” he said.


“I have some errands to run.”


“You want to drive my car in your current shape?”


Taking a deep breath, I thought. “Perhaps I’d better drive you,” I said.


“You don’t trust a senior citizen to drive?”


“There comes a time,” I said, “when we decide that it’s best that you not be trusted to drive a car.”


“Or cook around an open flame?”


“That’s why your species confounds the galactic elders so profoundly.”


“Why is that? Don’t Falloonians age?”


“Not within your evolutionary paradigm, but that’s not the point. It’s your elderly we are talking about.”


“If I were a member of your Supreme Court, I could make decisions of such profound implications that their force would be felt far into the cosmos.”


“Ask those killed and maimed during your country’s little adventure in Iraq.”


He had me there. I said, “So what brings on this particular little tirade?”


“What about the devil? Is he making you do it?” I laughed.


He didn’t. He said, “One of your supreme court justices said this week that he believes that the devil is a man and he is walking among us.”


“Can you imagine the consternation this caused among the members of the Galactic Monitoring Team?”


“They don’t believe the devil is walking in our midst?”


“Oh please,” he said, raising the saucer to his mouth. His hand shook and a few drops spilled on the table.


“You’ll believe in the devil soon enough,” I said. “if the missus finds a watermark on her table.”


He laid the saucer aside. “Mrs. Big Dope already thinks you are a sort of devil,” he said. “But that is a point for another day.”


“So your monitoring team is concerned about our highest court?”


“They have inserted a Comtascruwitcha into your midst.”


“Oh, it’s a Falloonian term roughly translated as ‘messenger of evil’ and the purpose is to see if your species would recognize ‘The Dark One’ if he did appear.”


“He is a senator and he hails from the great state of Texas.”
Posted by JimmieG at 6:05 AM No comments:

As many times as we have talked about it, C.W. still uses my computer while I’m sleeping. I wouldn’t mind if he used it for research, but inevitably I receive these strange deliveries after one of his sessions.


By the way, does anyone know what a person might do with a used milking machine? I mean a person who doesn’t own a single cow?


But back to the matter at hand, I heard him giggling this morning and went in to see what might be up. There sat a sixteen-year old boy with oversized spectacles laughing and punching keys.


“Loookit, Big Dope,” he said. “your species just cracks me up. They are, like, weird and I’m like, about to roll on the floor.”


“Do you know that you, like, have an annoying habit of repeating things I say?”


As I made coffee, I slowly counted to ten. “And what dots have we not connected this time?”


“When is the last time you had your translator adjusted?”


He ignored me. “Lookit,” he said. “She, like, drives 30 miles into the provider city each day to work.”


“Who does she, like, think pays for the highway lanes she uses?”


“I dunno. The Koch Brothers?”


“You make the spontaneous sounds and movements of the face and body that are the instinctive expressions of lively amusement and sometimes also of contempt or derision at me, but I am serious,” he said.


“Okay,” I said. “Who builds the highways that allow her to escape reality?”


“Your state uses the sales tax partly to build commuter highway lanes,” he said. “So some of the cost is, like, paid by the least of those among you when they buy winter clothes for their kids.”


“Yes, precisely. By the way, would you have them check your Galactic Universal Translator?”


“Why?” he said. “I’m not sick.” He typed on the keyboard. “Now here’s a man, and he is a senator, who says that we don’t, like, need national health care since we can simply drop those lacking sufficient money to live at a standard considered comfortable or normal in a society, like, off at the nearest emergency room for their health care needs.”