He wanted to play a game, but I wasn’t in the mood. Then he explained it. See what you think. He calls it “What’s the metaphor for?” I know, I know, but let him have his fun. Here is an example, as he put it to me.

A young farmer had a farm, at least that’s what we’re told. And on this farm he has a barn, to keep things from the cold. And in this barn are hornet nests. All, we’re told are bold. But, they are quite small and cause little harm unless one harasses the individuals in the nest. The previous farmer had lived in peace with them for years. So, we have a small farm here, a big barn there, a farmer home, and hornets everywhere. See, I've told you so.

Now it gets interesting. A half-mile away, the “Mother of all hornet nests hangs from an oak three. This nest provides the inhabitants of other nearby nests.

Once a day, sometimes more often, the farmer walks down the road the half-mile and pokes the great hornet nest. As the hornets fly out in search of the danger, he quickly moves back to the farm, whereupon he goes to the barn and pokes a couple of the smaller nests. This, he thinks, makes them fearful, maintaining peace and harmony.

Well, it turns out that this particular species of hornets has a genetic code that passes memories from generation to generation. They also have communication skills.

No matter, the farmer says, “They’re just dumb hornets and I’ll handle them.” Off he goes to poke the mother-nest again.

So, what’s the metaphor for? 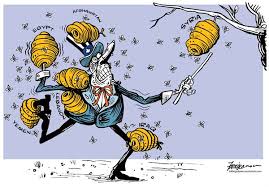