He commented that I seemed more at peace than usual this morning. I explained.

I’ve been doing some thinking. If the “We want Armageddon” crowd wins, and America sends ground troops into this Middle East mess, I’ve plotted two alternate courses. I call them “pro” and “con,” I thought about “Uday” & “Qusay” but those seem to be taken at the moment.

With “pro,” I’ll grab my protest-posters, find my old tie-dyed shirt and my “Che” hat, and hit the streets until they gun me down, or reason returns to America. C.W. thought that would appeal to our old friends and neighbors.

Under “Con,” I’ll build my wife a mansion and a ten-acre dog pen with heated dog houses, take that trip to Galápagos Islands I’ve always wanted, purchase that $5,000 guitar I crave, get a case of cigars, load up with expensive Scotch and cheesecake, then pick, while she tends the animals, till the fireball gets us. No need to save our money for old age. We’ll be as old as we’re gonna get.

C.W. thought that approach a little cynical. “You just want to appeal to your right-wing friends, don’t you?” he said.

One could do worse, in either case, than dying without ever voting for a scoundrel or a warmonger. 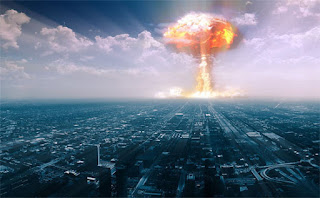