C.W. provokes me to no end. I know we have an agreement. It’s called, for some reason, “Don’t Inquire and Don’t Enlighten.” This simply means I am not to ask him directly about the vast store of useful knowledge his planet must have about the universe. He, then, is not supposed to tell me anything that would disrupt the normal development of our evolution.

But, hell, he could give me a hint on occasion, couldn’t he?

Not this little prick. Today, for some reason, he had assumed the shape of a carnival barker, complete with a striped sport coat, white pants, a red-satin bowtie and a straw hat. We were strolling down Capitol Avenue and I was keeping a sharp eye out for anyone who might know me.

“So, step right up young man,” he said. “I understand you want to know the secret of life.”

“Just a little info about the formation of the universe will do,” I said, ducking my head as a city-owned vehicle appeared in sight.

“The secret of life. Well I’m here to tell you,” he said in a loud, huckster’s manner, more TV evangelist than Carnie. “The secret of life is this—now listen closely,” he paused for effect. “Life is just a bowl of cherries.”

He looked hurt. He hurried a few steps ahead of me and then spun around. He gazed directly into my eyes the way a puppy will when he realizes that you have no treat for him.

“If you say so.” I walked along saying nothing.

“Yowza, yowza, yowza,” he said, loud enough that people on the street turned to look.

He could be slippery. “What’s that?”

“I will tell you the most important thing for your species to know at this exact moment in your history.”

“You can take it to the bank, brother,” he assumed his carnival voice again.

“No tricks. Nothing in my hand, nothing up my sleeve.” He demonstrated this.

“What do you think it might involve?” he said.

“The type of political structure.”

“So quickly?” No wonder your species still believes in ghosts.”


“Just shut up and tell me.”
“Okay, you are ready for the most important piece of information there is?” 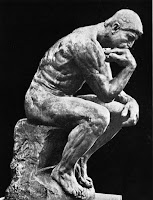 I leaned forward, shaking with anticipation.
“If A equals B, and B equals C, then A equals C.”
I was exasperated. “C.W.,” I said. “Our leaders already know this.”

He looked at me, sadness in his eyes.