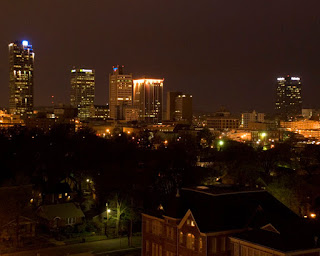 Captain Kirk and I were sitting on the balcony of my condo smoking cigars and enjoying some Glenmorangie Scotch. Actually it was C.W. and I, he being in the shape of one of Captain Kirk’s later kin, a Boston attorney. And he only claimed it was Glenmorangie. He can be such a liar. Anyway, it was good and we were feeling expansive, watching the night lights of downtown Little Rock sparkle like flakes of diamond dust being blown across a flame.

“Tell me something, Jimbo,” he said.

“Why does your species hold such grudges?”

“I mean why did I have to get these Cubans from our South American representative and then sneak them in to your country?” he said, regarding his cigar at arms length.

“That’s what you always say,” he said. “Now tell me, is your country at war with Cuba?”

“We invaded them once, and it’s Judas Priest.”

“They tried to threaten us with nuclear weapons.”

“We haven’t traded with them.”

He took a long, sensuous draw from his cigar. “And when was that?”

“Yep—and is this going somewhere?”

He ignored the question. “And since then?”

“Nothing much, just some mutual mischief making and no trade.”

“Any effort at reconciliation?”

“A few attempts, some progress on occasion, and some near misses.”

“Screw you,” I said, but I couldn’t keep from laughing.

He studied the hot end of his cigar. “So since 1961, the Cubans haven’t done any real harm, say like a group of its citizens flying planes into your buildings or something like that?”

He indicated his cigar, “This is the only major product that they have embargoed?”

“I see.” He looked at the skyline and smiled.

“I’ve been studying this character named Jesus that your people write about.”

“Has your country ever considered following his teachings?”

“Oh please. His philosophy would be the most blatant sort of liberalism today, and liberals are despised by much of society.”

“Along with the poor?”

He took another draw from his cigar, exhaled, and then took a sip from his drink. He smacked his lips in delight and formed a smile so broad that it challenged the moon for attention.