A group of friends and I were seated comfortably, enjoying the 25th year of the King Biscuit Blues Festival on the banks of the Mississippi River in Helena-West Helena, Arkansas. The crowd was loving the music. In fact, beer and enthusiasm had already combined to convince a number of folks to start dancing. It was a beautiful October day, and all seemed well with the world.

A friend sitting beside me offered to make a beer run before the next act, one of his favorites. He left and I became distracted by an elderly white lady dancing with a whole group of folks and anyone else who happened to walk by. A hand tapped me on the shoulder. It was my friend, the beer-runner, or so I thought.

Jeez. It was C.W. in the shape of my friend Perry. I had left the alien a while back sitting on the seat of a Harley Davidson Motorcycle on Cherry Street belting out a blues rendition of “The Promised Land, and in the shape of a motorcycle gang member.

“What are you doing?” I asked.

“I been walking around looking,” he said. “There are at least a dozen different races of folks gathered up here from all parts of the Globe having fun together. Look there.” He pointed at an elderly African-American man who had stopped and was dancing with the lady I mentioned earlier.

“Yes,” I said. “That’s what happens at blues festivals.”

“That’s amazing,” he said. “In many parts of your state, people leave their homes and move away to some dreadful place to avoid living near people of different races. Here they travel from all over to be together.”

“It’s something alright,” I said.

“Do the races get along this well all the time here?”

“But,” I added. “I am told that people do work together as a single soul to put this show together.”

We watched the act for a moment. A young guitarist was putting on a show and the crowd was urging him on.”

“I don’t much like the politics of your species,” he said from out of nowhere.

“Why don’t they change the process?” he asked.


“Too much cost sunk into maintaining it, I suppose.”
“Wouldn’t it be better if Congress met only at blues festivals?”


I looked at him to see if he was serious. He was.
“Let me get back to you on that. Here comes Perry.” I pointed to our right.
When I glanced around, he was gone. 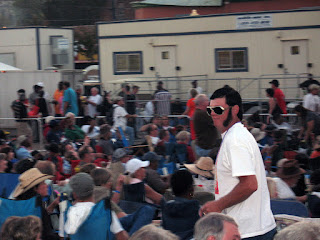 Perry eased back and handed me a beer. He started to say something but a wave of excitement moved through the crowd. There were shouts of: “Look,” and “I told you he was alive,” and “Oh my god, he’s real!”
It seemed that Elvis was walking along in front of our part of the park. He hurried along but stopped every once in awhile to wave.

“That goddam little twerp,” I thought to myself.
Posted by JimmieG at 12:03 PM