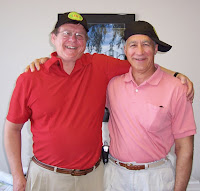 C.W. showed up at my place last evening as a set of conjoined twins. Seriously. They were perfectly formed young men save for a stretch on the outside of their hips about eight inches long. They didn’t seem to have a lot of trouble walking as long as they agreed on a direction.

My wife wasn’t home, so when I opened the door, Lefty (I swear that was his name) attempted to turn around but was stopped by Lucky.

“Yes you are,” the other said. “I’m not moving until we talk to this guy.”

“Well talk away, asshole, I ain’t stopping you.”

“Now godammit, there you go again.”

I was still standing in the doorway with my mouth wide open when Lucky finally said “Hello Jimmie.”

“Kiss my ass,” Lefty said and planted his outside foot just outside the doorframe.

“Dammit,” said Lucky. Can’t you stop being a total jerk for one minute?”

Lefty didn’t move so Lucky leaned in toward me.

“We want to know about this remarkable trick you people have of simultaneously holding two diametrically opposed beliefs.”

“Dumbass,” Lefty interrupted. They don’t hold the opposing beliefs. They just express them at the same time.”

“Hell no,” Lucky said. “Sometimes they are willing to die for either one of them. Right Jimmie?”

I still just stood there.

“It seems to be a trait unique to homo sapiens,” Lucky said. “We haven’t noticed it in other species.”

“We haven’t looked at all the other species,” Lefty said. “But go ahead and answer the question, jerkoff.”

“Well sometimes we might seem inconsistent in our logic,” I said.

“So there is something you two agree on,” I was trying to buy time.

“Well it’s not like we’re joined at the hip or anything,” Lefty said.

“Actually we are,” said Lucky. But you know what he means.”

“Not precisely,” I said.

“Look,” said Lucky. “There is this weird little dude who manages a state just south of here, ‘Lustyanna’ or something like that.”

“I think you mean Lousiana.”

“Whatever,” said Lucky. “Now one day he comes out and says his state is being destroyed by the effects of drilling for petroleum in the floor of the ocean that borders his state.”

“And,” interrupted Lefty, “The next day he comes out and says it would destroy his state if the government put an end to drilling for petroleum in the floor of the ocean that borders his state,” he paused. “And the people around him don’t even notice.”

I was trying to think of a way to describe the intelligence of the typical southerner when Lucky said. “Now that is the sign of a bunch of real idiots.”

“Or,” said Lucky, “A bunch of truly talented minds.”

With that, they walked away. I watched and they did quite well, except that every hundred feet or so they would stop and turn in circles for a minute or so, first in one direction, and then the other.
Posted by JimmieG at 7:03 AM