Have I mentioned before that C.W. can shift into any shape he wants, even famous people—dead or alive? I found that out when Ozzie Nelson showed up at my door one evening. You remember Ozzie and Harriet, the ideal couple of the 1950s. Well there was Ozzie, all smiles. 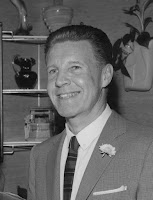 “May I come in?” he asked.
“Please do,” I said. “What’s up?”
“Went back and visited a typical family in 1957.”
“You can go back in time?”
“Maybe not in the sense you think,” he said. “We can absorb enough of the essence of a period—through books, moving pictures, music, that sort of thing—that we can “enphase” ourselves into a time period, so to speak.”
He was making up words again so I just listened.

“It was a very good experience,” he said. “We all had dinner. Well I didn’t. They couldn’t see me so I just pretended. Do you ever just pretend, Jimmie? It’s a marvelous feeling.”
“On occasion,” I said. “So what happened?”
“Well the father read the evening paper while he ate and the others all took turns telling about their day.”
“Anything juicy?”
“Now listen to you. You should be ashamed.” He smiled, then: “Well their teenage daughter did say that there was a rumor about a girl in a grade behind her who got, well… in a family way. But she had found a man who was going to help her do something about it.”
“And?”
“She was evidently in the hospital near death.”
“And the man who did it?”
“Which one?”
“The one who put her in the hosptital.”
“She didn’t get to finish. Two of the young kids started playing a game and one knocked a glass on the floor.” He paused and looked around the room. “Did you know that parents back then would physically assault their children?”
“Oh yes, I know it well. What happened?”
“Well, one minute the father was sitting at the table smoking a cigarette and the next minute he is pounding this five-year old with a thin board that he apparently kept ready.”
“Pretty bad,” I said.
“Oh, that wasn’t the worst,” he said.
“No. After dinner he called the daughter in to speak privately with her, and I listened in.”
“What did they talk about?”
“He told her that she wouldn’t be able to go to college because he couldn’t afford to send both her and her brother. She didn’t take it well. Became hysterical. Guess it meant a lot to her.”
“Anything else?”
“Before they went to bed, he called his son in and told him he had better buy some “sheaths” if he wanted to go out with girls for he wasn’t about to take care of some bastard kid.”
“What did his son say?”

“He said the church wouldn’t approve of the use of sheaths and then the father said, ‘Piss on the church.’”

It was quiet for awhile. Then C.W. looked at me. “Did they really do that?”
“What”
“Urinate on church buildings.”
“Not as a general rule,” I said.
Posted by JimmieG at 4:44 PM