This time I smelled C. W. before I saw him. He was approaching me from the windward side and I got the unmistakable whiff of the chronic homeless person. I was sitting in the park and enjoying the first cool day in a long time when he neared me, odor and all. He was in the shape of a young man in his late twenties or so, with course black hair extending in all directions. He was dark-skinned and appeared darker still because of the dirt and grime that encrusted him. He wore cheap sneakers, jeans and a reasonably new T-shirt with “Thank you for not sharing your hate” emblazoned across the front. He stopped for a moment to ask a stranger for money, accepted a rebuff, and then wandered over.

“Jimmie,” he said, taking a seat beside me.

“Try not to judge people by your sensory perceptions,” he said. “I have often observed that they can mislead.”

“By confusing the context.”

“Just as you did now,” he said. “You miss a message I might bring when you deny it due to the context in which I appear. It’s called ‘shalowaraten++’ on my planet and it seems to be a mental linchpin in most of your religions.”

“Yes, saying ‘black doesn’t mean black when I wish it to mean white.’”

“Haven’t you noticed that your so-called religious commandments never mean what they say?”

“Well, if a prophet says: ‘Give all your money to the poor,’ his followers who wish to keep their treasures to themselves say: ‘Oh, you’re taking that out of context.’”

“The command to love our enemies really doesn’t extend to those who really irritate us. It’s a command that almost always is …”

“Taken out of context.” I was getting the picture.

“ Precisely, and if the prophet says says, ‘Kill all apostates,’ the followers say …”

“I know, ‘You’re taking it out of context. He didn’t really mean that. Ours is a loving religion.’”

“Yes, and so on and so on. It seems to allow those who allege themselves to be devout to maintain their sanity.”

We were interrupted just then by a motorcyclist who stopped to yell at C. W. “Go back to Mexico you dirty Muslim.”

He took on a look of eternal sadness. “One can always spot the truly sanctified, can’t one?”

“My son, I despair at times as I mingle with your species.” 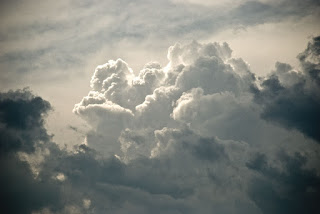 I didn’t respond.
Then he said: “Perhaps you could tell me one thing.”

“I’ll try.”
“Why are “In-context” religions so rare on your planet?”
“I really don’t know,” I said. “Perhaps it’s a matter of some evolutionary need to retain our options.”
“Peace be with you then,” he said, as he rose to leave. As he walked away, I saw the message printed on the back of his shirt.
“Critical thinking—Our only real hope.”
This from a filthy beggar who stank to high heaven.
Posted by JimmieG at 11:19 AM