Big Dope is out walking so I take this opportunity to communicate without his interference. As usual, I am mentally confused by the presence of a difficult problem or matter. (Editor’s note: He means “puzzled.”


I ran across the following photograph on your book of faces site. 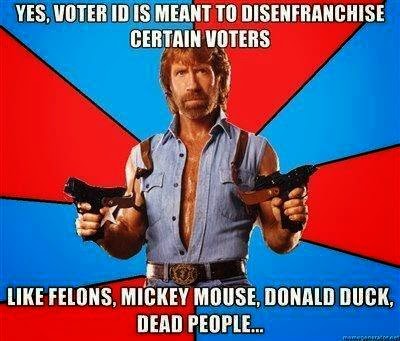 Now, as understand it, some members of your species want to hire an assassin to rid the populace of anyone voting who is unqualified for the privilege.


I understand not wanting people like J. Gordon Liddy, Chuck Colson, Oliver North, and John Poindexter to vote, but shooting them? Seems a bit strict, but you Americans know what kind of government you want.


Now though, how do you assassinate Mickey Mouse or Donald Duck? Would it be cruel to inform the sponsors of voter suppression legislation that both are cartoon figures?


Dead people? Seem messy to dig them up and shoot them, but why not? Lots of folks around here love to shoot guns and it might keep them from killing helpless animals.


The problem is: according to my research, the actual amount of voter fraud in your country is negligible.


When confronted with this data, sponsors of voter suppression legislation say they are acting to prevent something they imagine might happen.


My question is, purely as an alien observing your country: if one desires to craft legislation designed to prevent something that they imagine might happen, wouldn’t it be more productive to imagine that:


- The water and wastewater plants in the country will fail for lack of resources.


- Bridges in the country will begin to collapse for lack of maintenance.


- Nearly 20 percent of children go to bed hungry each day.


And finally, if there is voter fraud, the fact that such legislation is being passed seems to indicate to me, again just an observing alien, that it is not happening among the ranks of thoughtful voters, dead people, or cartoon characters. That just leaves felons.
Your Friend
C.W.
Also check out www.wattensawpress.com
Posted by JimmieG at 9:56 AM