Of all things, C.W. decided he wanted to learn to drive. Actually, as one who had piloted the galaxy on more than one occasion, he picked up the internal combustion engine easily. His main complaints are the mechanical inefficiencies─easily the worst design in the cosmos─and the unpredictability of his fellow motorists─doubtless the least attentive in existence. Nonetheless, we made it through the orientation and were making our final test run.
I had to smile. He had assumed the shape of a senior citizen, a lady, arguing that this would provide some degree of sympathy from inquisitive police officers or state troopers. There proved little to worry about, though. He maneuvered flawlessly with only a periodic “Oh, that poor dear should really pay attention.”
We tested his prowess in downtown traffic and then eased onto the interstate and headed out one of the major arteries serving the city. He seemed to enjoy the speed and flow of interstate traffic and I only found it necessary to caution him (her) about his speed once or twice.
“Sort of makes you feel both powerful and connected to others at the same time, doesn’t it?” he said. “I’m beginning to understand the attraction that operating a personal vehicle has for your species.”
“I suppose that is one way to put it,” I said.

“I mean, after all, you poor folks have so little opportunity to feel powerful.”

I ignored him. I knew he was only trying to wind me up. It is a frequent tactic of his.

At any rate, our attention shifted as we topped a hill and observed a long line of vehicles inching along the lanes opposite ours. They were heading into Little Rock but at a snail’s pace on this weekday morning.


“Must be a traffic accident back there, the poor people,” C.W. said in his most matronly voice.
I looked at him to see if he was putting me on. No, he looked serious.

“The traffic is that way every morning, C.W.” I said.

“People commuting to work from other cities.”

“They live somewhere else and endure this every morning to get to work?”

“Every morning of the week.”

“Why don’t they work where they live?”

”Then why don’t they live where they work?” he said as the freeway curved, providing a view of a line of creeping vehicles as far as the eye could see.

“They have their reasons, I suppose.”

I could sense his databank whirring through a complex statistical analysis.

“I see only one strong correlative factor,” he said.

I didn’t say anything.

“What is it with your species and skin pigment?” he said. 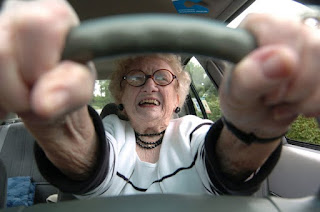 “Why you poor dears,” he said as he pushed the vehicle’s speed well beyond the legal limit.
Posted by JimmieG at 6:57 AM