It was August, when the climate doesn’t support civilized life in our part of the world. It is a good time to avoid contact with strangers and any sort of extended arguments. Walking is best done as early as possible in the morning.


So, daylight found me circling our downtown park, thinking about lost loves and missed opportunities. The park was deserted, that is until a figure emerged from a walking path and filed in a dozen or so feet behind me.

It was a well-rounded female dressed in spandex pants and a white t-shirt, both several sizes too small. I chose to ignore her and resumed my thoughts until she closed the gap and began speaking in a voice that pierced the morning peace like a flying shard of glass.

“By God you’d better not start that stuff up with me again.”

I looked and saw that she had an “ear-bud” attached and was undoubtedly carrying on a phone conversation. I continued walking.

“That’s what I told him,” she said. “He just acted like I was one of them two-bit whores he hangs out with.”

I walked faster, hoping to distance myself from the telephone talker. No luck—she sped up as well, even sounding closer that before.

“Then he come across that bed and started tryin’ to make up with me.”

She was quiet momentarily as the person on the other end said something. I took the opportunity to turn right in another attempt to escape.

“Hell, no,” she resumed as she followed me. “I told him he wadn’t gettin’ nothin’ off me as long as he kept actin’ the way he’d been doin’”

I went into a very slow jog, actually more of a waddle, hoping to gain some distance. It worked for a few minutes before I heard her gaining on me.

“Well, hell I had to go to the Doctor that morning and take a stool sample. I’m here to tell you it was stinkin’ like hell before I got there. I finally got in around ten-thirty and he put me up on that table … “

I had heard enough. Luckily, I was passing a bench and managed ease onto it so she could pass on by and take her conversation with her.

Unbelievably, she sat down beside me and started up again.

I jumped up again and started off. “Hey big dope,” she said. “Where do you think you’re going?”

I turned around and stared. “C.W. have you gone completely mad?” 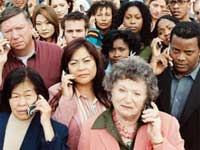 “Are you trying to be a total idiot?”

“I mean with this telephone crap?”

“Don’t you enjoy listening to it?”

“Hell, that was tame compared to what I hear on a daily basis,” he stopped and spoke into the earpiece. “I’ll call you back later.” Then he turned to me. “Is there no conversation you people won’t share publicly?”

“Sometimes I think not.”

“Weird,” he said, as he folded the phone and stared into space.