Sometimes C.W. tones down his appearance and this was one of those days. He asked me to meet him at a coffee shop in our local library complex.


Arriving, I recognized him straight away. He appeared as … how will I describe him? Well, “Grandpa Walton” would fit as well as anything.

He sat at one of the large tables with newspapers spread in front of him and a large coffee in his hand. He peeked over the top of a pair of reading glasses and motioned for me to sit.

“They don’t have real cups in here,” he said. “They serve coffee in these paper-sorta things.”

“You don’t find real cups much anymore,” I said. It’s best to agree with him just wait for the conversation to unravel. Patrons were stirring about in the shop, some studying the bookshelves lining the area. No one paid us any mind, a fact with probably says more about library patrons than it does about the species in general.

“Says here,” he began. “Let’s see, where is it?” He stirred the stack of newspapers, looking for a specific item. I waited.

“Ah, here it is,” he said, pulling the selection in front of him as he adjusted his spectacles. Then he took a sip of coffee.

“This is one of those “bits from yesteryear” columns—from a county newspaper out in West Virginia. “Says here from 40 years ago,” he looked at me and repeated, “Forty years ago.” The he resumed, “ ‘… the County Sheriff’s department destroyed a ten-acre field of marijuana plants this past Saturday and arrested the owner as it continues the war against drugs in America.’”

He looked at me over his spectacles as if I had been the owner of said crop. I knew how a suspect in a murder case must feel when he takes the witness stand. He sipped his coffee. 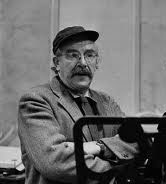 “Been waging this so-called ‘war on drugs’ for 40 years?”

“Probably longer than that.”

“Has your species been victorious?”

“How about a status report then? He said. “How are we doing … drugs pretty near defeated? Have they requested a truce to talk peace?”

“It gets more hopeless and costly each day.”

He fumbled among the papers again and slid out a handwritten note. “Here’s something,” he said. “This man of your species, Clausewitz, says that war is an act of violence intended to compel our opponent to fulfill our will.”

“So are you compelling ‘drugs’ to your will?”

“I’m afraid it’s the other way around.”

“Still burning crops and arresting people after all these years?”

He scattered papers around and produced another note. “Here’s one more,” he said. “Can’t find the exact author but it is widely quoted.”

“The definition of ‘insanity’ is doing the same thing over and over again and expecting different results.”