C.W. promised to come by the condo last evening so when he called, I buzzed him right up. Glad I did. I wouldn’t want him hanging around the front door in the appearance he had chosen for this visit.


Let’s just say he looked like a walking advertisement for “The American Hunter.” He wore camouflage from the top of his head to the soles of his feet. Even his hands sported “camo gloves.” His face was marked up like a D-Day paratrooper and his eyes rested behind a dulled set of aviator sunglasses.

It reminded me of how the reporters used to “garb-up” during the Iraq Invasion.

“What do you think?” he said as he banged his gun case into my most expensive piece of furniture.

“You wouldn’t even begin to want to know,” I said.

“Can’t wait for opening day,” he said. “If you haven’t figured it out already, I’m taking up hunting as a sport.”

“Let me show you this neat stuff,” he said, opening a bag—a camouflaged one of course.

“See here,” he opened a large sack. “This here is called ‘Deer Corn.’ I can put it in my kill-zone everyday for few weeks and the deer will be coming straight to it come opening day.”

I tried not to retch.

“And this here is female deer scent. Know what it does?” He started to open the bottle but I stopped him.

He pulled out a small recorder and flipped it on. There was a sound of repeated clanging.

“That’s a recording of two buck deer fighting over a gal.” He leaned back, evidently enjoying the sound. “That ought to raise a crowd.”

I motioned for him to turn it off.

“Now look here,” he said. He laid the bag aside and opened his gun case. “I prefer the most manly and primitive approach to hunting. Nothing but a muzzle-loader for me.”

I just stared at him as he unlimbered the gun from its case. Of course, it too was coated in camouflage.

“This here is a 50-caliber beauty build to the most exacting standards available,” he said. “And check out this telescope, 3-9x40 baby with a duplex reticle—waterproof, fog proof, and shockproof. What’ya think?”

“Thought you would be,” he said, apparently missing the irony completely. “What an experience, just man against beast in a primal contest of inter-species confrontation played out in nature’s neutral battleground on an equal footing.”

He removed his glasses. It was the actual C.W. again.

“Aren’t there enough wars going on at any one time to provide relief for your species’ blood-lust?” 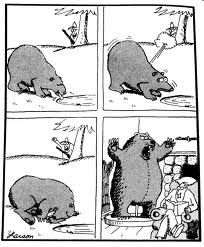 “One thing to consider,” I said.

“The deer don’t shoot back.”