It was early morning and I was taking my walk in anticipation of a nice plate of eggs and grits at the end. It was cool, and a low-hanging fog was sliding up from the Arkansas River onto the park around the William Jefferson Clinton library and park. It was a good morning for thinking of past loves, Bob Dylan songs, and homemade bread.

Off in the distance, I could see a figure through the fog, sitting in a hunched position on one of the park benches. It was off the walking path, so I ignored it until I heard someone calling.

I looked toward the voice and was surprised to see an elderly Chinese man with a large, pork-pie hat working with intensity over what appeared to be an abacus. I decided to ignore him.

“No, no, come here please, mister.” He yelled insistently, and though it was morning, I feared he might attract attention, so I walked over. He thrust the abacus toward me with a grin.

“What the hell are you doing?”

“Ah, quite so, young mister.” He assumed his character’s voice.

“Why are you giving math lessons? And to whom?”

“Your species is severely lacking in analytical skills. We discuss before.”

“How so?” He had my curiosity aroused.

“Look,” he said, and pulled a news-clipping from a file beneath the abacus.

I glanced at the article, which I had read a few days earlier. It reported that the United States Treasury had issued bonds offering a negative return as the latest insult in a long period of low interest on savings.

He relaxed. “It’s not going to get your species into the Intergalactic Math Bowl,” he said. “What’s the idea behind this latest brain atmospheric disturbance?”

“Whatever.” C.W. loves to pick up mannerisms from young people, sometimes forgetting his present shape.

“Best I can figure is this,” I said, trying to put on my best pundit’s face. “In a Corporatocracy such as ours, it is vital that corporations— our deities—receive cash infusions. We must place our savings in the stock market, and not in fixed-income instruments. So we offer no return on them. It’s a financial strategy known as ‘nudging,' as in out of fixed-income savings and into the stock market.’”

“Well, there is the additional fact that U.S. Treasury instruments are the safest investments in the world.” 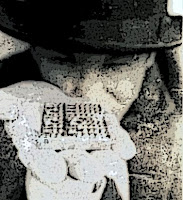 “Oh,” he said and smiled. “So your money is safe while it slowly disappears.”

“Or, you put it in the stock market.”

“Ah,” he resumed his character. “Then you have ‘preasure’ of watching it quickly disappear.”

He fiddled with his abacus. Then looked up at me.

“Most civilizations in the galaxy would, at best, use your species for cleaning sewage conduits,” he said.
Posted by JimmieG at 10:05 AM