Back to the antics of the Alien after he crashed our recent cruise—hoping to be rid of him for a spell, I found myself reclining under an overhanging deck in the “adults-only” section of the ship. I had been reading and fell asleep. Proust will do that to a person. I awakened when someone shook my arm and thrust a bottle of suntan lotion in my hand.

“Hon,” a voice said and I looked next to me at one of the most perfect bodies I had ever seen. “Would you mind spreading some of this on my back?”

My mind left France where I had been pleading with Marcel to lighten his prose and I focused on the source of this request. It was a stunning woman with ebony black skin face down on a deck chair and inclined slightly toward me with the most beguiling smile one could imagine. Then I noticed that she had untied the strings on her bikini top and was beginning to expose a near perfect gift of nature.

I must have been groggy from the sleep and inquisitive from the Proust, for all I could manage was, “Do African-American people sunburn?”

She managed a deep-throated laugh and then, “You don’t learn much from all those books, do you Jimbo?”

“Getting some sun, Hon. What are you doing here, except staring at my assets, and I mean assets with a capital a-s-s-?”

“Shut up,” I said. I looked around to see if anyone was watching.

“C.W.” I snapped. “In the first place you are a goddam alien. In the second place, we are in the shade.” I gave him back the tanning lotion.

“Hon, you are getting excited.” He gave me this coquettish smile that would have made a World War Two veteran do the Buck and Wing. “Now tell me something.”

I made sure my wife hadn’t appeared on deck. “What?” I said.

“Why are you people so hung up on burning your skin so dark? Isn’t it unhealthy?”

“And isn’t it true that, up until recent history, a darkly tanned skin was considered a ‘thing that is a perfect example’ of the lower classes?”

“The ‘epitome’ of the lower classes. Yes. You are right. Mae West would have been appalled.” 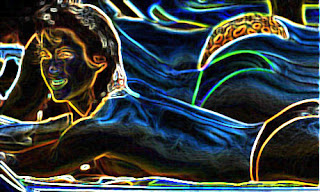 “Well, an ancient Faloonian practice of conjuring up images of monsters to make children behave. You know, an attractive but damaging solution to a minor problem.”

“Then the coquette spoke. “But I know what it really is, Hon. Want to know?” It tapped me on the forearm.

“I think you people finally figured out that ‘black is beautiful’ and you want to get there no matter what.” Then she turned toward me. “See what I mean?”

I gathered my Proust and headed for our cabin. I could hear the squeaking of deck chairs all around me.
Posted by JimmieG at 12:14 PM