Oh my goodness … the Alien C.W. has locked himself in his room and won’t come out. “Because of the news,” he says. He swears we must be manufacturing the news, much like The Onion or that Fox Channel. “Everyone is doing it now,“ he says.


I can’t tell what shape he has assumed this morning. It sounds a lot like the character of “The Beaver” on the old TV series.


I tried reasoning with him. “Come on out, and let’s talk about it,” I said.


“Whatchew mean?” I said in a feeble attempt at humor.


“Are you pretending to be African-American?” he said.


Oops. Not a good approach. I tried another. “Let’s go for a walk with our neighbor George,” I said. “He wants to come over.”


“Did you say, ‘He wants a comb-over,’ like that comedian in New York?”


“The one pretending to be running for President.”


“I’m afraid someone will shoot me if I go into a coffee shop.” I distinctly heard him sniff, then say, “It ain’t safe for a man out there.” 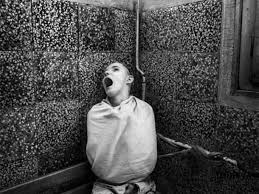 “Then change to a woman.”


“Are you seriously asking me that? There isn’t a country on a planet in a galaxy in this universe that could think up the crazy things that your news reports. I want to go back to Falloonia.”


“Look,” I said, “maybe you need some quiet time. Let’s go sit in the church down the street for a while and meditate on things.”


“Ooow,’ he said. “A church? Haven’t you seen what just happened in Charleston?

Please click some ads. I need to buy a ticket home for a rest.