“From things I’ve seen and learned, it’s what many of your species don’t understand about politics,” he said.

“Oh?” We were sitting under my favorite oak contemplating the death of a famous American, C.W. and I. He had, for the occasion enphased (as he calls it) into the shape of the young American soldier from West Virginia, the one who had been killed on his 19th birthday, 14 days before this draft term ended.

I looked toward him.

“I would say to the ultimate limit.”

“Would it change your mind to know that I was once ordered to open fire, when I was an M-60 machine gunner in an infantry platoon, on a sleeping village?”

“On orders you say?”

“I blew the hell out of everything in sight … men, women, children, dogs, rats, water buffaloes, Viet Cong, you name it.”

He paused and sniffed. “Was I doing my duty?”

“It was later,” he said, “two days after the attack on the first village. In the next one, they were waiting for us, had set up the perfect ambush: rice paddies to the right, gun emplacements to the front and left. We had no place to go. The Lieutenant was from the Academy. He thought all was copacetic, as he phrased it, but we all thought things were way too quiet. “Don’t argue,” he said as he sent us forward with the squad to set up an emplacement. My crew and I had peeled off, using the rice paddies as a buffer, and set up as the rest of the squad did an oblique to the left and moved forward.”

“It broke loose. Interlocking fire. The point man and two others fell, both dead. Two others were wounded. The rest were flat on the ground. I opened fire.”

“Troops came out of the village in perfect order, firing at us. I looked back and the Lieutenant was running toward the rear of the company, motioning it back. We were stranded.”

“The survivors of the squad began pulling their wounded back. The three of us with the M-60 kept firing.”

“The others pulled back to our rear and ultimately reached the company with their wounded. We managed to slow the assault until they were safe.”

“We stayed and kept firing until they reached us. By the time we died, the company had formed a defensive line and was driving the enemy back. My last memory was of a mortar dropping in front of us into a mass of men. Then the rest were on us.”

We sat in silence.

“And this,” I said at last, “has what to do with our mourning an American hero today?”

“What was he doing when the ground fire hit his plane?” he said.

“And specified targets. On orders,” I said.

“As he saw it. As his country defined it.”

“Duty, then,” he said, “may require us to do things we ordinarily wouldn’t do?”

“After capture,” he said, “how did our deceased hero perform?”

“As honorably, bravely, and magnificently as any American ever has, under the worst of conditions, for five-and-a-half years, without medical care for his broken body.”

“Without question.” I thought for a moment. “Did you know that, partway through his imprisonment, they offered to release him?”

“Yes, he was the son of an admiral, and the publicity would have been significant.”

“He pretty much told them to stick the offer in their scuppers.” 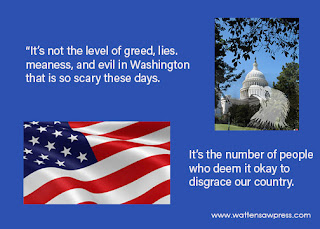 “Even though he dishonored your country by being captured?”

“That’s the opinion of only one man.”

“No,” he said. “That’s the opinion of an entire political party.”

“Of course,” he said. “Silence and inaction can carry honor or dishonor with equal ease. Political opportunity can determine which course people or parties choose.”

“But,” I said, “the party sends out campaign ads telling how much they love our military and what great patriots they are.”

“I can,” he said sadly, “call myself a retired veteran of a foreign war enjoying a yard full of grandchildren, but that doesn’t make it so.”


Delta Dreaming
All Hat No Cattle
Enjoy these at all? If so, order Big Dope's Book at Wattensaw Press, Amazon, or other book sellers. It will make him so happy. Also, click on an ad. It earns him a little and costs the advertiser, sort of a win-win.