Some strange characters wonder around downtown Little Rock and I thought I had found one. I left the library with a couple of books in my hand when I heard someone behind me carrying on a heated conversation. With himself.

I couldn’t hear all the dialogue but I could tell he was asking questions and answering them all in one breath.

I did catch, “Who in the dark-red shadow of hell do they think they are? Ruffians, that’s who. Oughta kill ‘em. No, killing’s too good. Send them to a work camp.”

He went on like this until he reached me and bumped into my shoulder so hard I dropped the books. He immediately spun around and snarled, “Out of my damned way.”

“What of it?” he said. “Come with me.” And he headed to a sitting area in the library complex. I picked up the books and followed. We sat, and I looked at him. He wore a rumpled summer suit and a green visor, looking every bit the prototype 1940s movie version of a newspaper editor.

“Shut up,” he answered. “What do you think of Franklin Delano Roosevelt?”

I thought for a moment. “My father thought he was one of the greatest Americans who ever lived.”

“I can’t disagree,” and I started to peel off the benefits that Americans enjoy because of his work.

“Be quiet, and listen,” he said. “Have you ever seen his memorial in Washington?”

“Oh, yes,” I said. “Quite moving since they decided to present him seated in his wheelchair.”

“Know what the bastard little kids have done to it?”

“The figure of this great man has a finger extended.”

“The little punks have polished the end of his finger until it is bright.”

I thought for a moment and smiled. “You don’t know, do you?”

“It’s an old American tradition. Old men used to trick young boys into pulling on one of their fingers.”

“As soon as they did, the old man would … you know, ‘break wind,’ exhibit flatulence.”

He looked puzzled. Then the clouds lifted. “Do you mean …?” he stopped. “You’re telling me those kids are trying to make the statue fart?” 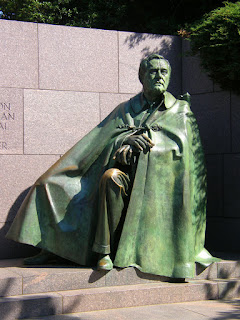 “Yep.”
Had I not seen it, I wouldn’t have believed it. The old editor—that is to say C.W.—broke into a smile. Then into a laugh. Then into a fit of laughter until he fell back against the bench and roared into the sky as if he wanted the very heavens to share his joy. He laughed so hard that he farted, to the delight of those watching.
“Godammit, that’s funny,” he said.
I agreed.
“You know, Jimmie,” he giggled when he finally composed himself. “There may be hope for your little species yet.”
I think FDR would have been pleased at the thought of making a newspaper editor laugh.
Posted by JimmieG at 11:33 AM